Everyone knows that no matter how much you diet and exercise, there are always stubborn, localized pockets of fat that will not go away. Your reason for choosing liposuction may be as simple as just wanting to look better in your clothes. While liposuction is not a replacement for a healthy lifestyle, it can make you look and feel better. 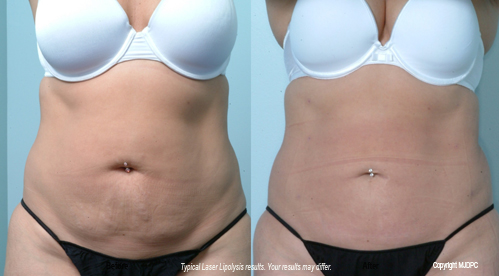 What is Laser Lipolysis ?

Laser Lipolysis is performed by our doctor for patients in our region to rapidly dissolve fat and tighten the surrounding skin almost anywhere in the body. Now FDA-approved, this revolutionary and minimally invasive procedure uses a laser to offer less bleeding, swelling and bruising and a quicker recovery time than conventional liposuction.

Using local anesthesia, the procedure is performed with a small cannula that contains a laser fiber that when moved back and forth the laser energy dissolves fat and tightens the surrounding skin. 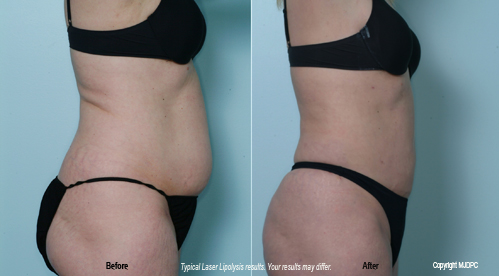 How does Laser Lipolysis differ from liposuction?

Laser Lipolysis adds a “skin tightening” element to a liposuction procedure. It stimulates the production of collagen and breaks up dimples. Laser Lipolysis is often combined with traditional liposuction. In most instances this is a two-step procedure that only requires local anesthesia.

Laser Lipolysis uses smaller instruments and laser technology. It is a more efficient method of removing fat from small areas of the face, neck, arms, and abdomen and areas where the skin is lax. Laser Lipolysis causes less bleeding, bruising and swelling, which results in a faster recovery.

What are the advantages of Laser Lipolysis over other procedures?

The best candidates for Laser Lipolysis:

How are the benefits of Laser Lipolysis measured?

Cosmetically speaking, successful treatment is measured in inches rather than pounds. The weight removed is not as important as the improvement in your body’s contour. Most important is your improved self-image and self acceptance.

Is the fat removal from Laser Lipolysis permanent?

The fat removal is permanent. Should you gain weight, the fat will return to the areas not treated with the laser. For best results, maintain a healthy diet and exercise program.

How many Laser Lipolysis treatments are required?

Laser Lipolysis can take 15 minutes on the neck and several hours on larger areas. Most patients have only one treatment. However, a touch up treatment may be required in some patients.

How will my figure look after Laser Lipolysis surgery?

Shortly after the procedure, the treated area will appear tighter, compact and smaller. The skin tightening is a gradual process and with continual improvement best results are seen after several months.

What will my recovery from Laser Lipolysis be like?

After our physician performs Laser Lipolysis, patients are back to work in only a few days. You will go home after the procedure and rest for a few hours, after which you may gradually increase your activity as tolerated. A pressure garment may be placed over the procedure area for several days to several weeks depending on the body area treated. Refrain from strenuous exercise for several weeks.

Find out if you could benefit from this procedure.